Control your PC with your Android devices

Android and Windows… can communicate over a Wifi connection but, in order to get something out of it, some application has to be listening on the Windows platform, and this is what1 brings me2 here.
some related links…


This Tabs introduction… should clarify the idea, with the help of a growing list of screenshots1 and some samples showing how they are your own custom components2 in this app and an example3 showing what they are made of.

Some definitions… to put names on the different pieces like Tabs & Tags1 SHELL 2, SENDKEYS3, SENDINPUT4, the list of SERVER commands5 # comments6, APP commands7 and some practical illustrations, will explain all the details.

The Designer… is a Tab Editor1 used to create Custom profiles2 and an intersting Todo list3.

Google Play Store does not support any free test period for paid apps, but at this stage, you can get a free Test version1 from this site. Here is how to Download and Install2 the Android Client APK and the Windows Designer and Server zip archive.

...your input is quite welcome on the following sites:

Android and Windows ?…
What is this all about?
This app goals are rather straightforward: If we can communicate with Windows using a mouse or a keyboard, it seems obvious we should be able to design a more sophisticated interaction scheme with android smartphones and tablets.

It looks like the subject has not been explored far enough to build more than a few extensions to what we can get from a keyboard or a mouse. Searching Google Play Store with the following keywords told me that I was looking for some really odd thing:

The results was a small list of handy mouse, keyboard or remote-desktop utilities.

The "make it happen" utopia greeting came to mind, again, but this time, I was ready to give it a real try and here I am, four months later.

Using those words in a few sentences, it would come to that:
I would like to control my Windows PC using my Android tablet with the following in mind:

As programming is what I do for a living, I was pretty sure someone had this idea before I did and I was eager to play with a few cool apps …

No luck! Curiously, the subject has not been addressed yet, unless I missed it completely each of the many times I searched the store.

If I put this here, it's because it's always good to know who is talking. The same words can have more meaning when you know where they come from.

Any bragging aside, I bring all my experience into this project in order to accomplish something worth more than the average android app. And I've seen a few already showing that android has all we need to step forward. I'm talking about 35 years of passionate work since the dawn of Unix, K&R, Workstations, Smalltalk. I was working for Tektronix at the time… I'll stop here about the details as this is enough for those who know what I'm saying and already too much for those who don't.

You don't do things the same way with last gen development tools that won't let you wander around with your fancy ideas as long as they are designed to make sure you don't. Well, I'm still using vim. All I ask Visual Studio, Android Studio, etc. is to feed the compilers with my stuff an add their distribution trimming because they are good at this. And when I'm done, I still can get back to the main road looking for Google Play Store.

Essentially, when I think about what a button (a.k.a. RTab) should offer in the three applications involved here, it's more about the intent of the user rather than the process involved. It's all about who is driving computers, users in front of it or processes and their code behind, you choose, well …if it's an option!
(…you can get the idea if you take some time to play with this page links)

I will take care of the back-end part myself but I need to get enough feedback from users to make sure I won't miss some good idea you may have. The goal is to get the more of what we can expect from all our gadgets. 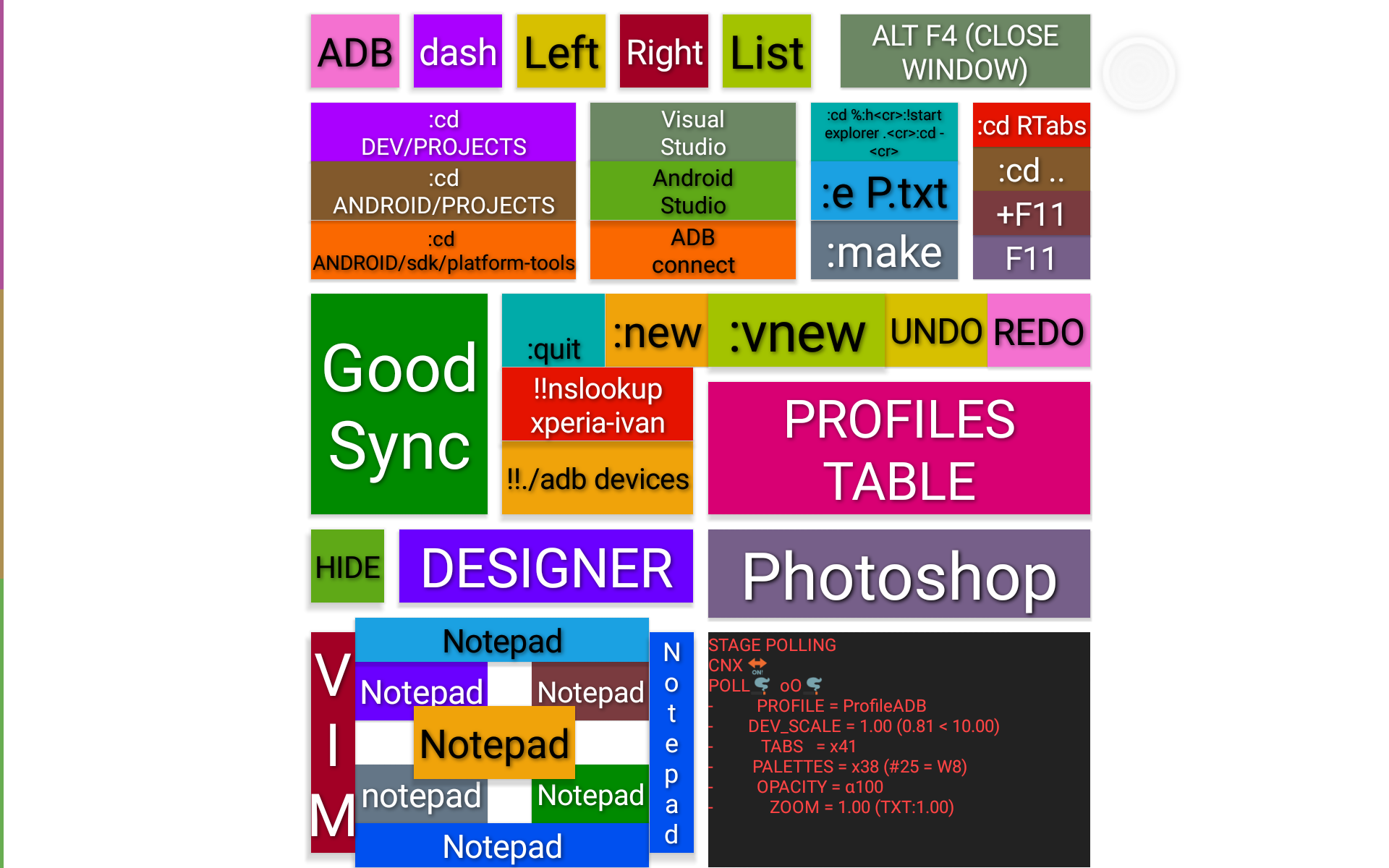 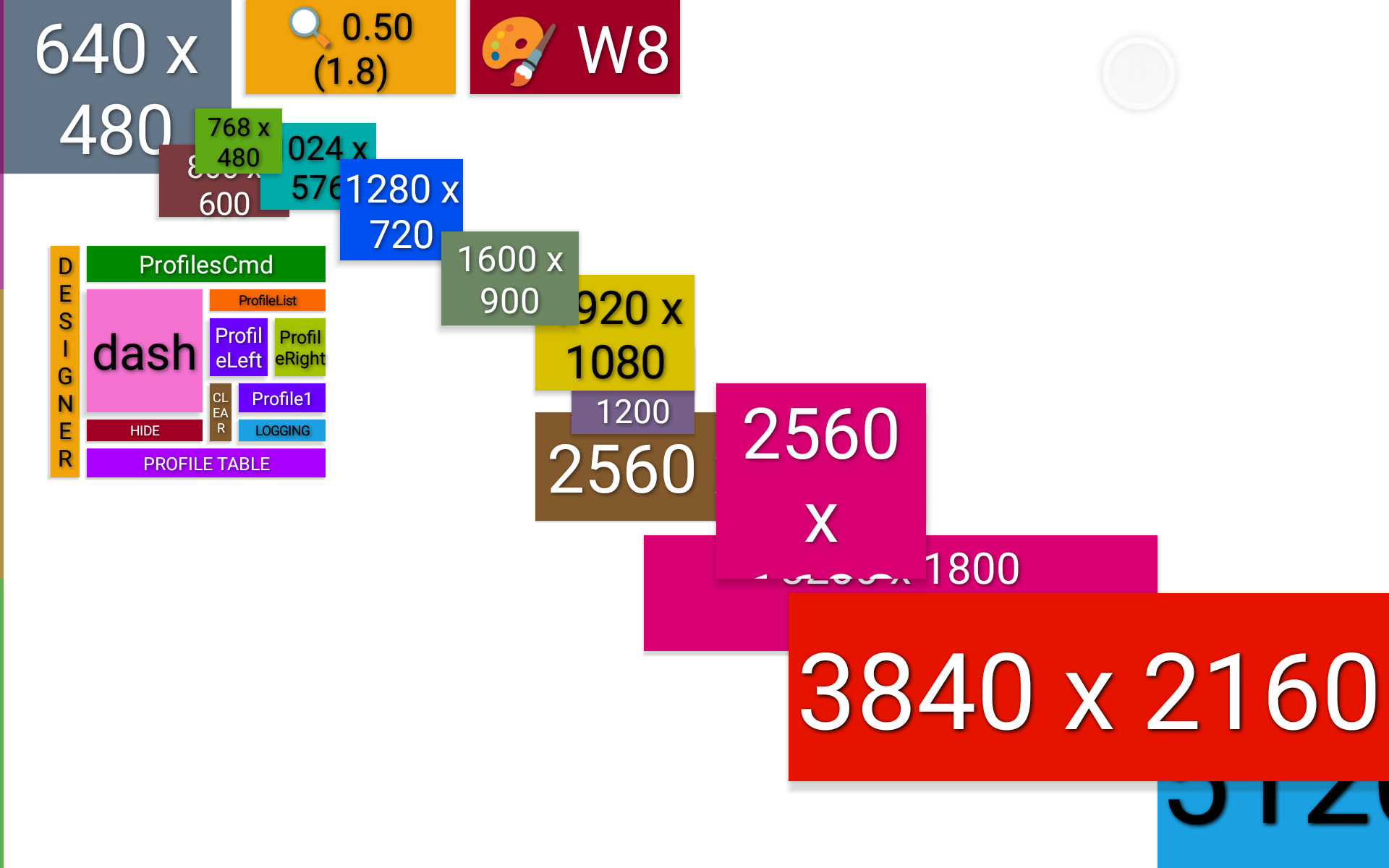 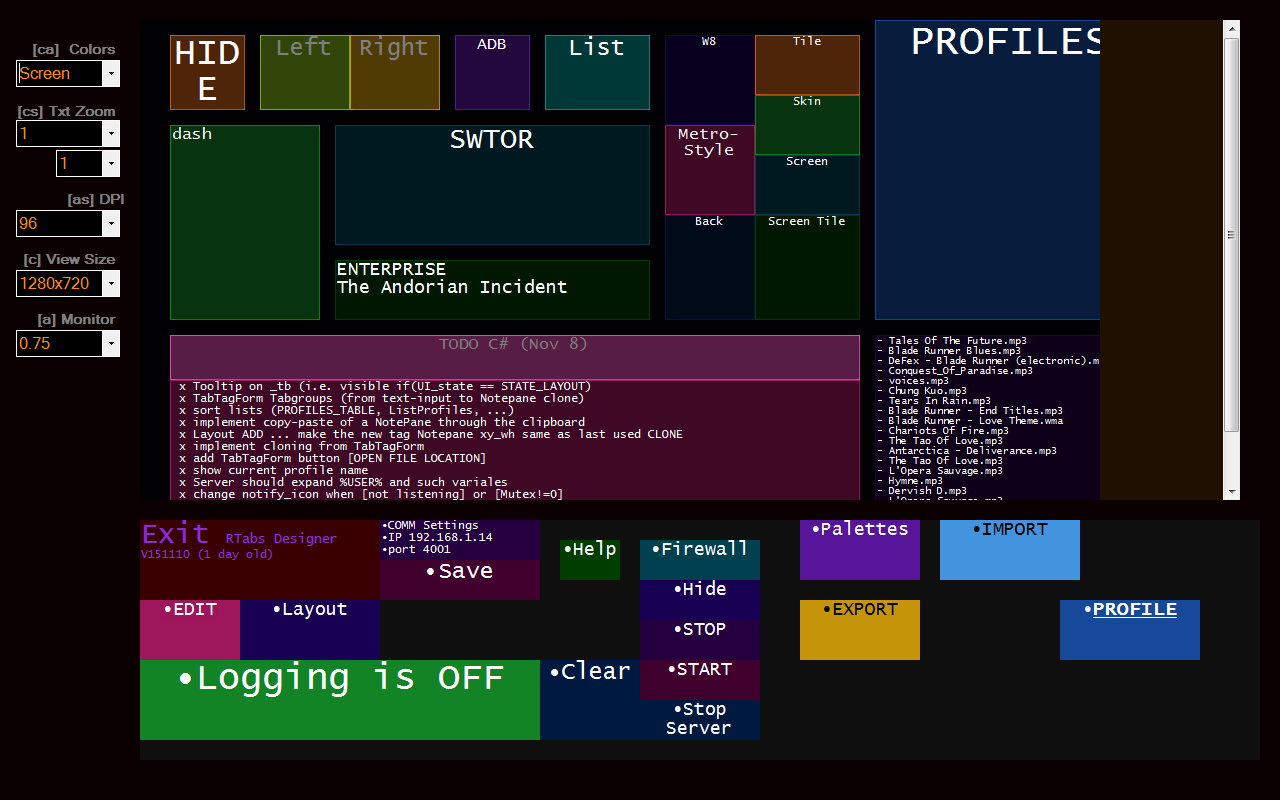 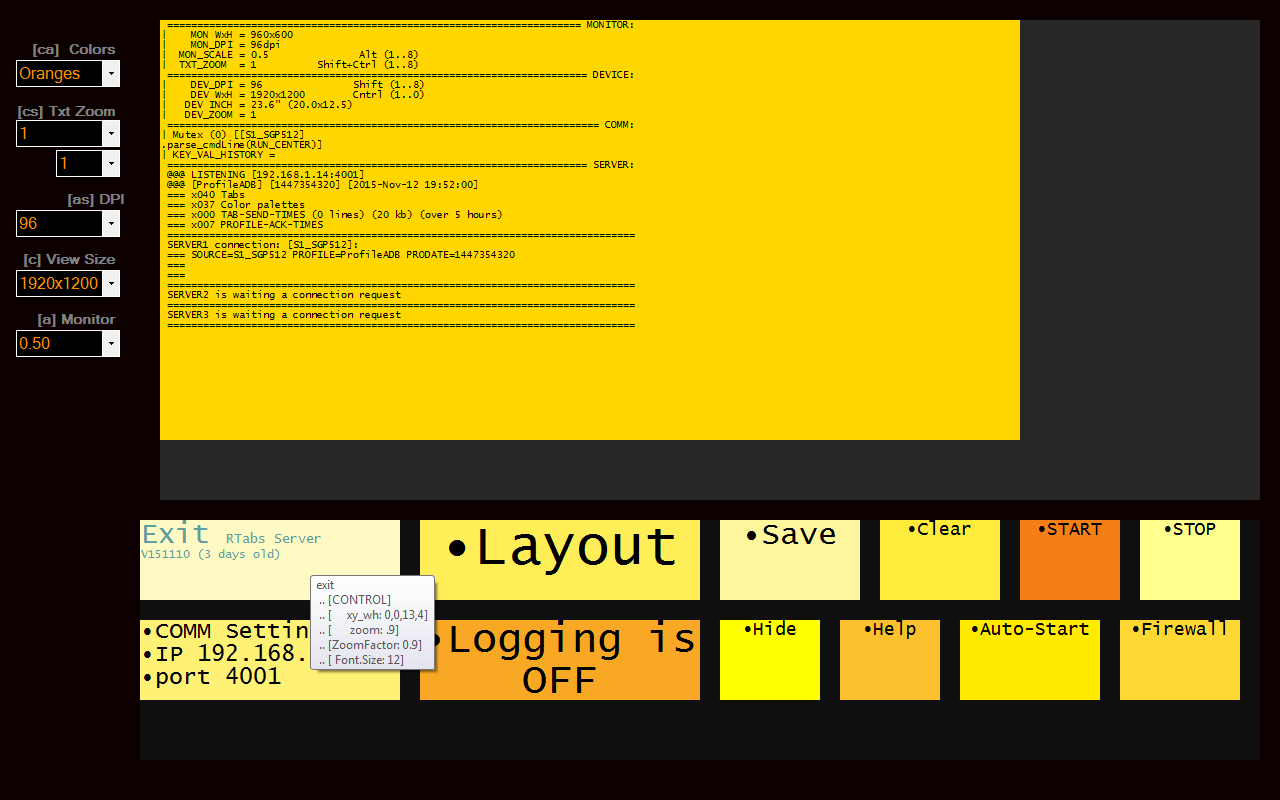 Custom Tabs2
A tab item example3
As an example, here is the definition of the Youtube tab as it would be displayed by Notepad:

I won't get into more details at the moment as this is only to get an idea of how easy it is to do the user part of the design, even without a designer.
Some syntax rules to swallow and that's it.
Of course, those can be packed in a simple text file or embed in an email to cut and paste.
More about this later…

Definitions…
Here are some examples of the different kinds of tabs and a few of the commands we can assoctiate to them.

Tabs and Tags1
Here, the tag property contains the associated command like tag=SHELL …, tag=RUN … or tag=SENDINPUT … while the text=YouTube property is what will be displayed.
SHELL2

This type of buttons send some keyboard events (text from some specialized cheat-sheet for example) related to specific applications.
There are some examples in the gallery (with the due credit to their author and a plan to get to know how they could be interested, or not, to get involved…)

SENDINPUT4
As with SENDKEYS, buttons with the tag=SENDINPUT ... send keyboard events but those are received at the rate expected from a hardware keyboard. The software of this RTabsServer module comes from a DX1-Ergodex driver I had to rebuild a few years ago. Although these events have an 'artificial signature', games have no way to make the difference with a hardware device sending some macro sequence as there is none.
I could experience a quite different results with a use-case on The Elder Srolls Online and Star Wars, The OLd Republic. As ESO was ready to play along with Sendkeys generated Virtual keyboard events, SWTOR did not catch its Slash-command trigger (the first slash character) for the most part. Once the SendInput version was working, with the exact same input syntax (nearly a copy-paste profile), the result was a 100% working solution with the full set of emoticons from the gallery.
server commands5

RUN and SHELL can be added a direction suffix like SHELL_DR or RUN_DR: Here is the list of windows layout supported by the server (screen halves or quarters): TODO: add more...
# comments6
Some tabs are just comments when they have a tag=# ... specifying a null-effect command.

But those have their own usefulness when the tab's text attibute (what is displayed) contains a wall of text that cannot fit into a limited space. When you click on one, it turns full-screen showing the full content.

Any application button can be part of a custom profile:
PROFILE tabs

The best way to illustrate how this can be helpful is by inserting some Profile loading buttons to navigate from one profile to another related one. A few screens with less buttons will be easier to use and organize than a single larger one containing all of them. Both may be used as long as you can zoom, pan and scroll but it's even easier not having to.

A Tab's tag property for these buttons looks like this:
tag=List or tag=PROFILES_TABLE
(The second one opens the app's sidebar folder showing profiles stored in the device. It has the same effect as sliding a thumb to trigger the left sidebar mid-handle)

RTabs design can be as simple as using one of the available WORKBENCH templates from the Android device, filling in the blanck tabs with URLs to browse or PC commands to send. But it also can be as sophisticated as we want when building a custom control dashboards.

That's where a more elaborate processing can help when working on dozens or even hundreds of tabs.

Custom profiles2
RTabs PROFILES are simple Text files you can open and manipulate as if they were simple lists of items you can play with.

The Android device and PC Server automatically synchronize those files when (if) you setup a WiFi connection (based on their date of last modification).

If needed, their content follow a few rules that should easily make sense to anyone curious enough to think about how we can specify web adresses, PC commands, rectangles and colors.

There is nothing more to it and these rules are not really an issue as long as we can specify these values one way or another.

…here too, more on this as soon as the needs to describe these tools take precedence in current dev priorities

There should be one for each of the Android App, the Server and the Designer.

The would-be-nice part of the Todo list seems endless

But I still have a must-be-solved one too:

Downloads…
free Test version1
RTabs app on Google Play has a link in its READ MORE page for those interested by a free download link.

Strangely enough, it is not possible to organize a free access to paid apps during their test stage… It looks like this is considered necessary by the administrative staff in order to avoid some kind of security risks.
Anyway, this won't be a problem as long as you can install the required files from this site.

So, as I don't want to disappoint anyone this soon, you should rather get the free test apps… directly from the remotetabs.com links listed in the Download and Install section below.

Download & Install3
As you should not pay for an immature piece of software, those are free versions that will be available as long as some issues may still disrupt user experience.


One of two Android apps:
The two PC-side Windows exe: